The last day to see my installation at Quint Projects is this Saturday, 7/16/16.

If at some point you told me that you plan on seeing it but have yet to do so, be advised that the excuses submission deadline has passed.

Just drive over and see it already. LA people, I’m not excluding you.

(only half joking. heh)

This is the last time you’ll ever get the chance to see this piece. After Saturday, it’ll be gone forever.

Gallery hours on Saturday will be from 10am – 1pm. If you wish to see it before Saturday you may make an appointment with me or the gallery for a time that’s more convenient for you.

I hope to see you there.

A very grateful and sincere thank you to everyone that helped me make this piece a reality, to Philipp for helping me document it, and to all of those who made a special trip to come and see it.

Below are some lesser quality iphone photos that I took along the way.

The last day to see “Three Thousand Four Hundred Fifty Threads” will be Sunday, November 22nd. If you wish to make an appointment, click on the Contact button above and send me a message. I’m available to show it any day between 10:30 – 4:00. Again, ICE Gallery does not have operating hours. If you’d like to see this piece you’ll have to make an appointment.

The above photos are by Philipp Scholz Rittermann. I’ll post the whole set once the show closes. It is the case with most art, but especially with this piece, that a photo is a very poor substitute for seeing it in person. So don’t settle for regret. Come see this thing! I hope to hear from you soon.

Ok, we’re ready to roll! This installation took about 4 times longer to complete than I thought it would but it’s finally finished.

For multiple reasons, there will be no opening reception. Perhaps there will be a closing, I haven’t decided. Instead I’d like to invite you to contact me through this website (or any other way you’re connected to me) to set up an appointment. The piece will be lit at night and viewable through the windows. However, I’ll only be showing it from the inside during daylight hours as this is when it looks it’s best. If you’d like to come and see it I’m available to show it almost any day. Just give me 24 hours notice and we can set up a convenient time for you

Thank you to all of those that helped me complete this piece. It would’ve taken me weeks to do it on my own.

Thanks to Mark, Storm, Kyle, Philipp, Trista, Terry, Jason and the Toms.

Extra special thank you to these two guys:

Andrew and Sol, you guys worked your butts off. Thank you so much!

As much as I enjoy having exhibitions of other peoples work at ICE Gallery, ultimately the main reason I keep the space is to have my own. After 13 months since reopening, that’s finally going to happen. This will be my first site conditioned installation since 2013. I hope to see you.

Back in December of 2013 Bread & Salt, the new home of ICE Gallery, had an open house to show off all the hard work that had been done in the building over the past year. ICE had just barely finished putting up drywall and was in no shape to put on a proper exhibition. However, I decided there should at least be something within the newly demarcated corner space. The end result was a sort of found object installation which utilized the old rusted bread racks from the previous tenant of the building. It was only viewable for one night, so thank goodness my pal Philipp Scholz Rittermann got some great photos of it before all the paper was ripped off and the racks went away to a scrap metal grave. 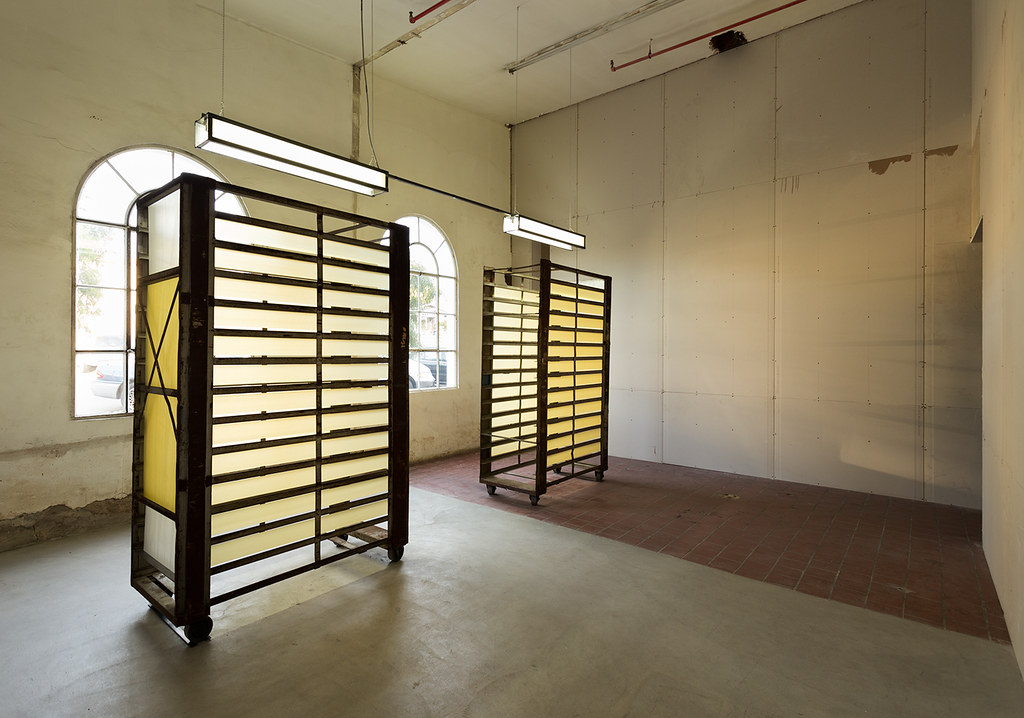 On another note, the new ICE Gallery will hopefully be having it’s first exhibition the beginning of July 2014 (fingers crossed).  Details coming soon.

In our last update we told about a new opportunity we’d been given.  Well, here are the photos that show the results of that opportunity.

Ya know, just when it seems as though no one’s paying attention to you, along comes an opportunity out of the blue.  Two months ago none of us knew anything about Jim Brown and his architecture firm, Public, or his newly acquired huge project, Bread & Salt.  The latter being a 40,000 square foot building built in the early 20th century which was, until recently, a Weber bakery.  Jim had apparently been silently paying attention to ICE Gallery and, just when we were about to be evicted from our space in North Park, offered us a spot at Bread & Salt!  Wow, we’re so appreciative for the offer and the opportunity.  Our new space will be much smaller, but it has a lot of potential and we’re extremely excited to get to work on it.

Not only were we offered a new space in a small corner of Bread & Salt, we were also given the opportunity to tackle the entire 40,000 sq ft building.  The building is more or less still in it’s raw Weber bakery state, minus most of the heavy machinery.  There’s a ton of work to do before the building is ready to be inhabited by it’s future art and design tenants.  Perfect!  That’s just the kind of space we hope for.  It’s the kind of thing we’ve been talking about for the last few years (“Wouldn’t it be great to be offered an interesting space where you’re able to create anything you want?”) and now we’ve been given a shot.

The four of us have staked out our individual spaces throughout the building and are in the process of installing what is shaping up to be a very solid and diverse exhibition.  We hope you’ll come join us and see it for yourself on Friday, February 8th, from 6-9.  This one is a big deal for us and we’re anxious to show you the work plus the unique building that we’ll soon be a part of.

Thanks Jim and Isabel!